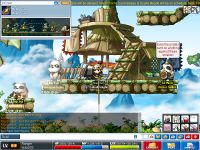 Herb Town is located in the Mu Lung Garden region, which can be reached via a flying crane from Mu Lung. Herb Town can also be reached by the Dolphin Taxi in Aquarium for 10,000 mesos. It features a Bellflower and ginseng theme, and carries on with the Asian themes of Mu Lung. The area is very swampy, and fog rolls over the water standing along the ground. The monsters outside the town follow with this theme, to an extent. The first monster one encounters walking towards Herb Town from Mu Lung is Mr. Alli, an alligator type monster that has a bird on top of it's head. Pirates attack the town from time to time, stealing the valuable Bellflower and Ginseng plants grown here. The people living here are the same Panda-like creatures that populate Mu Lung. Inside town, there are NPCs that sell weapons and armor, and give out quests, mostly related to stopping the pirate raids. Herb Town is the only town on Ossyria without an Area Boss.

The Herb Gardens are where the people of Herb Town grow the valuable Ginsengs. They have to age for a very long time, so the area is split according to this aging process into the 10 year old, 50 year old, 60 year old, 80 year old, and finally 100 year old Herb Gardens. Not far away is the Bellflower valley, where the animated root creatures, the Bellflower Roots, live. They used to be peaceful creatures that would never consider attacking humans, but the Lord Pirate kidnapped the king of the Bellflowers, Wu Yang, and forced them to become monsters.

Accessed from a hidden portal not far from Herb Town, the pirates have docked their ship and are planning the raid on the defenseless town. Many pirate creatures appear, resorting to taking the Bellflower creatures hostage. They wield swords menacingly at both players and their captives. The maps begin to change to wooden decks and the trees become masts. Hordes of the pirate Captains and Kru storm the area, trying to rush out the invaders.