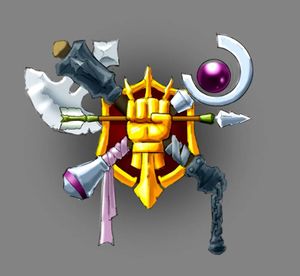 The crest of Crimsonwood Keep, displaying an Axe, a Staff, and an Arrow held in a hand which seems to be wearing a Claw and with a knuckle of some sort ontop. This represents all 5 Non-Noblesse classes.

This is the newest area to be added to the continent of Masteria. It's a castle-type area that is high atop a mountain, surrounded by a maze-like forest. It is the second town to be located in the region of Masteria called the Phantom Forest, the first being Haunted House. It is located on the left side of New Leaf City. The monsters' levels range from 45 to 120. Crimsonwood is mentioned numerous times in the descriptions of iTCG (Trading Card Game) items as an important place in the history of the continent. According to this text, it was once ruled by Grandmasters, apparently one for each of the four original jobs. Crimsonwood Keep also served as the headquarters of at least five groups of Masterian warriors, those being the Stormcasters, the ranged-fighting Windreavers, the magician-archer Flamekeepers, the mysterious Shadowknights, and the courageous Bosshunters. The keep fell shortly before the disappearance of Masteria after a long war with the people of Krakia, who were under the influence of an evil, as of yet unnamed Alchemist.

Now, however, the castle is under the influence of a bizarre and evil group referred to as the "Twisted Masters", and the path leading up to it is lined with monstrous counterparts to each of the groups formerly housed here. 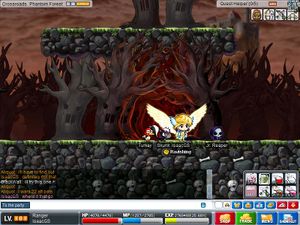 A player walking in the Phantom Forest Hunting grounds. The character is going through a portal to another map or exiting a portal.

Phantom Forest is a forest located just north west of New Leaf City, it was once referred as Crimsonwood Forest before it became corrupted by the evil from the Twisted Masters that reside in Crimsonwood Keep. Before reaching the Keep, players must pass through the Phantom Forest, which is connected to the existing Phantom Forest maps at Haunted House. The monsters in the forest are the weakest of the expansion, starting at level 45. Not included in this are some monsters which were already released, such as Jr. Wraiths, which can also be found in the forest. The boss monster Bigfoot is said to roam out here, randomly encountered on several maps, as though it is wandering through the forest. Another species found here are the Elder Wraiths, a monster previously referenced to in the iTCG description of the item Crystal Ilbi. Beware! If you see a bag of money on the ground, it will most likely be the first form of the monster, Leprechaun. Hit the bag and out pops its real form. At the edge of the Phantom Forest is the next section, the Crimsonwood Mountains.

Additionally found in the Phantom Forest is the Raven Ninja Clan's camp at the Dead Man's Gorge. It serves as a resupply area before heading into the deeper, more dangerous parts of the region. It is not considered a town, however it is similar to the Excavation Site in Perion in that no monsters appear here and there is a large number of NPCs. After completing quests for the NPCs here to gain their trust, players may buy potions and throwing stars, exchange monster badges, and forge new weapons, in that order. 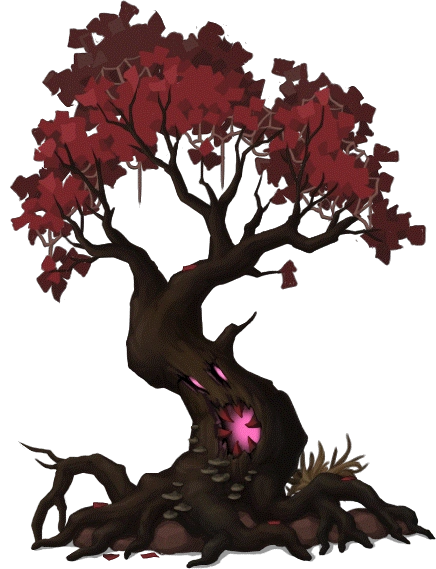 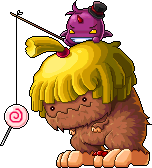 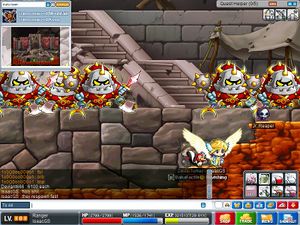 Standing at the gates of Crimsonwood Keep, the path is blocked by the Crimson Guardians.

This area comes after the difficult, maze-like Phantom Forest. Before accessing the rest of the Mountain, players must pass through the Jump Quest-like area called "Valley of Heroes", where the deadly Totem poles called Menhirs pose a threat to passersby, dealing a whopping 50,000 damage. There is a possibility for the player to bypass this area safely but the player must be in possession of the Marker of Heroism which is used to teleport via statues around the Valley of Heroes and currently it can only be obtained via a quest through Lukan.

After passing the Valley, players emerge at the cliffs, where Windraiders roam. From here, there are many cave-like areas recessed into the mountain, providing solo dungeons for players. Jack Barricade, brother of NLC's John Barricade, is found in one of these. Typhons, flying, stronger cousins to the Gryphons, appear, and pose a threat as they may knock an explorer into the chasm below, sending them reeling back into the Valley. Finally, one arrives at the keep itself, a colossal structure high upon the mountain. A final obstacle, the Crimson Guardians, spawn in high density, and fast. 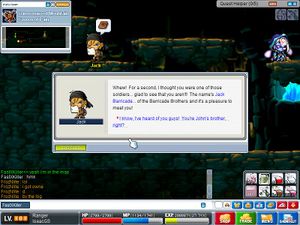 The cavern of Pain. Jack is explaining a quest.

Off the mountain are a number of caves. Each one is isolated from the others, but they share many features in common, such as good spawn and a mix of Firebrands, Windraiders, and Stormbreakers. Jack Barricade is located in one of the first ones encountered.

Crimsonwood Keep was originally founded by a legendary warrior called Christopher Crimsonheart who built the keep within the mountains surrounded by the forest. Hence the name of the forest, mountains and the keep was derived from his name. 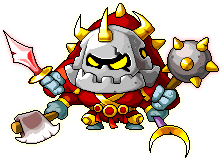 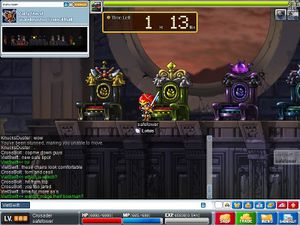 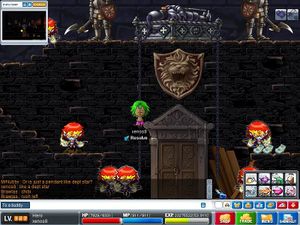 Once past the Crimson Guardians and inside the keep, there is the courtyard. The courtyard has 5 statues, one for a representative of each class. Past this is the Hall of Mastery, where there is an enormous statue of a four-armed warrior holding weapons from each class, symbolizing Christopher Crimsonheart's mastery of all disciplines. From here, it is possible to enter the 5 Guild Halls, one for each species at Crimsonwood Mountain. The Guild Halls act as pure spawn maps, where only one type of monster appears to simplify hunting. The Hall acts as a town map, preventing anyone who should die or fail the PQ from being sent all the way to Haunted House. This makes these ideal maps for drop hunting.

At the top right of the hall, there is a door NPC which can be used to reach Jack Barricade, who starts the Crimsonwood Keep Party Quest.