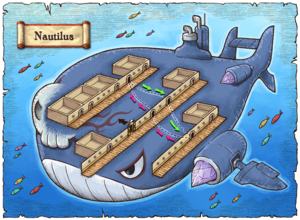 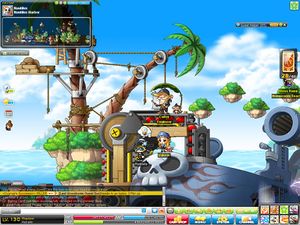 The town of Nautilus Harbor. The Nautilus is docked near the center of town.

This town is accessed from the bottom right portal at Six Path Crossway. It is a small archipelago of islands with a huge whale-shaped submarine docked at them, near Florina Beach. You can make the job advancement to the class, Pirate, here. The Pirate Job instructor is named Kyrin, and she can be found inside the sub. Henesys is partially linked to Nautilus, while Florina Beach is accessible by Nautilus.

The Nautilus is a well traveled sub which has reached its current location after sailing in from the far side of the current world map. It features a warp portal which can instantly teleport travelers to Omega Sector (For the price of one warp card), which seems to be the source of the ship's technology. The ship's propellers are replaced by Lithium stones from Magatia. 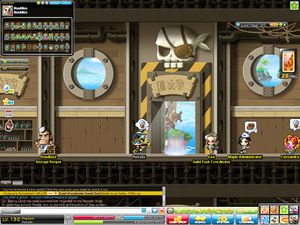 Aboard the bridge, the interior of the Nautilus.

The interior of the ship is extremely large. The ship has three decks. The lowest deck has an engine room, which is almost entirely flooded. Several dolphin-like creatures, called Whalians, swim around the central power source, an enormous hexagonal crystal. This deck seems to be in a state of disrepair, as many crewmembers are patching up the hull and fending off a shark attack. Here, one can access the Generator Room, which contains the central power source, an enormous hexagonal crystal, and the Bedroom. The middle deck is where a player entering the sub first appears. Here, one can access the Free Market the Cafeteria, Weapon, Armor, and Potion Sellers. The upper deck has a target range, the Galley, a supply room in which an elderly bird resides, the conference room, , and the bridge, where Kyrin is found. The bridge is also where the portal to Omega Sector is located. Navigating the ship can be confusing at first, but the ship map greatly simplifies things.

Right before you reach Nautilus Harbor, you will find Pigs and Orange Mushrooms on the way there.

Please note This area was closed as of the Elite Heroes/You and I update.

On the Beach are several different NPCs that have quests. You will start out on the Beach where the Pigs are found, then move near the Harbor, where Starfish are found, and then you'll reach the Low and High Tide Seas, where Jellyfish are found. Past the Jellyfish lies Florina Beach. You can also talk to Pason at Beach : White Wave Harbor and warp to Florina Beach for 2,000 mesos.