New Leaf City is a town founded on the ruins of an ancient city, called Old Sappe Village, that sunk into the ocean over 1000 years ago. It housed a technologically advanced civilization that used powerful techniques to perform good acts. No one knows why they disappeared, or why the continent suddenly surfaced. The town is run and populated by a number of fascinating characters, ranging from the mayor, Icebyrd Slimm, to renegade Amorian prince Jack Masque. The city uses a set of warp systems developed by the local genius and time traveler, Professor Foxwit, called Foxwit Doors. The city's laws are enforced by the ironically named Lita Lawless, a former thief from Kerning City. The final "founding father" of the town is a mysterious stranger from Versal, Maple's parallel dimension, named Elpam Gorlab (Maple Balrog backwards, as though in a mirror), where the Balrogs are kind and loyal to humans. During the holidays, many other residents having begun moving in, such as O-Pongo, the Versalmas Mouse, The Glimmer Man, a space exploring mage whose body can turn to diamond and is also seen in Amoria's Party Quest, and Little Suzy, a young girl who is confused as to which holiday to celebrate. All except the Glimmer Man have since departed. New Leaf City seems to be intimately connected to Amoria and Omega Sector, and frequently references the Nihal Desert region, particularly Ariant. Currently in GlobalMS, interestingly the Yetinx portal is being used as a portal to Sweet Cake Hill, an event map for GlobalMS 4th year anniversary. 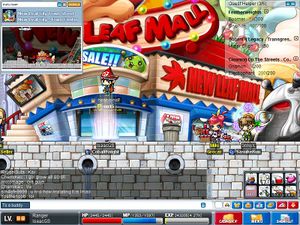 The mall in the center of New Leaf City.

New Leaf City also has the NLC Mall, where a number of NPCs that perform various tasks can be found. A hair salon, plastic surgery center, lens store, and more are located here. Other vendors are located outside of the mall, and sell exclusive weapons and special potions, which (in GlobalMS, MapleSEA) are often significantly cheaper than their ordinary counterparts in other cities. New Leaf City can be reached by the subway train which travels from Kerning City, and the subway station on both sides is equipped with a marquee that announces the train's arrival. At the far left side of New Leaf City, there is the NLC Taxi, which can take players to Haunted House. Another town accessed from this left side, Crimsonwood Keep 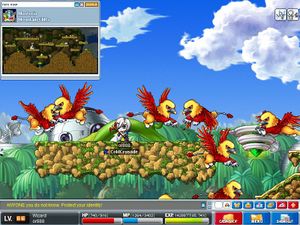 The Krakian Jungles of Masteria, just outside of New Leaf City.

The Krakian Jungle is the area located immediately outside of the town of New Leaf City. It is populated by monsters of varying degrees of strength, such as the Mighty Maple Eater plants and Street Slimes. The infamous Boomer monsters also reside here. Gryphons patrol the highlands over a huge fall to the jungle floor below. Rumor has it that a lost city is located deep in the jungle, called Krakia, and it seems that Professor Foxwit's arch-nemesis might have discovered it... 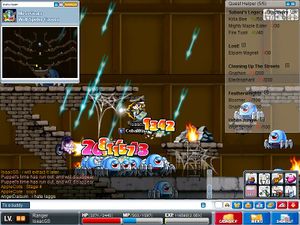 Bigger Ben is a large clock tower, located on the far left side of New Leaf City.

Bigger Ben is a giant clock tower located on the left side of New Leaf City. It is based on one of the ruins left on the island. At this point, there is only one Bigger Ben map, called "Lobby", implying that there are more maps to be added here. The deepest portion, MesoGears, is filled with Gear Portals, an ancient teleporter system used to navigate the deeper portions of the ruins. These work differently than the Foxwit doors, as they are, for the most part, one-way only. Monsters can be found here in the MesoGears area, a basement-type location that has been infested by Killa Bees, Fire Tusks, Electrophants, and Wolf Spiders. Near the deepest point is a tombstone which stands in remembrance of the mysterious Christopher Crimsonheart, an immortal warrior who paradoxically seems to have perished. Two other tombstones, the Sunstone Grave and Moonstone Grave, are also located in the MesoGears, and together the three form a riddle that's waiting to be solved.

In March 2012, New Leaf City was invaded and destroyed by aliens on the search for ores, and it is up to you to get rid of them! The continent of Masteria was restored in February 2014, but the aliens are still lingering around the Krakian Jungle. It is your duty to get rid of them and destroy their drill again. 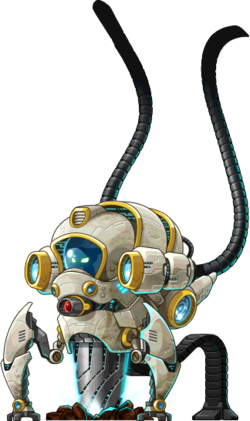