This area of the game is unplayable. Previously available game features are described on this page. This section is covered here for historical reference. Please do not add or remove content. 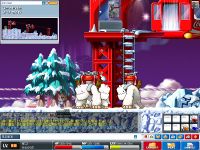 The only way to Coke Town is by talking to the "Coke Bear Administrator" in most towns. Coke Town is a wintry area with a Coca-Cola theme, and even Coca-Cola themed monsters (some of which have projectile attacks made of cola). Giant Coke bottles are frozen into the background. There are buildings shaped like Igloos in town, with coca cola logos splattered across them. Most of these houses are empty, unfortunately, but the few NPCs are friendly polar bears with snowboards and telescopes. Big speakers are on the edges of some buildings.

Aurorae hang gloriously in the sky, as players take out coke seals, cans of coke called Coketumps, Coke and Icy Golems, plus frozen torties. Weaker monsters are also found here, like coke slimes, snails, pigs, and mushrooms. Playful Pepe-like penguins pop out of the ground suddenly, though these can be a threat as they deal damage to players walking by. Red ski lifts can be seen in the background, and occasionally walked on. At the final map on the right, Yeti carrying Coketumps on their backs roam. Once defeated they will drop unique event items.