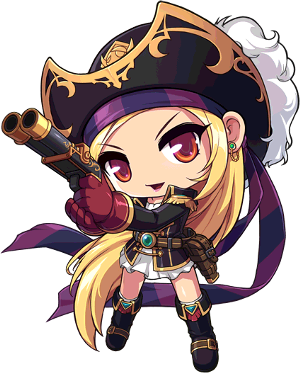 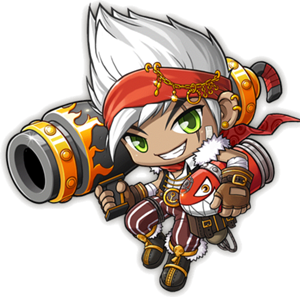 The path of the Pirate is a popular path in MapleStory. There are three types of them: Corsairs, Buccaneers, and Cannon Masters (Cannon Shooters/Cannoneers). Note, Cannoneers have their own character creation button. Gunslingers are faster and ranged attackers. Brawlers are melee, close-ranged fist fighters who deal lots of damage and have high HP, but they must get extremely close to their enemies and thus tend to take a lot of damage. Cannoneers are ranged, like Gunslingers, and even share a few movement skills. They have powerful but sort of slow attacks. The third job is forced, depending on what has been already chosen: Outlaw from Gunslinger, Marauder from Brawler, and Cannon Trooper from Cannoneer. For the 4th job, Outlaws become Corsairs, Marauders become Buccaneers, and Cannon Troopers become Cannon Masters.

Upon arrival at Victoria Island, talk to Olaf and pick your job quest. Take the taxi to Nautilus Port and enter the submarine in the center of town. Walk to the right and enter a door with an "UP" arrow over it. this will take you to the top deck of the ship. Now, walk left and enter the farthest door. Inside is the bridge, where Kairin is located. Talk to Kairin and make the job advancement.

When you reach level 10, head to Nautilus Harbor. Enter the Nautilus, and head to the top left of the map. Speak with Kyrin and become a Pirate. Kyrin will give you both a Scallywag Knuckler (knuckler) and a Pirate's Pistol (a gun). Both items are Pirate only and unable to be traded.

When you awake from the launch, you'll find yourself in a cabin in the Nautilus. Cutter will inform you that the rough landing was caused by the monkey who snuck on board. Since the monkey likes you so much, he gives you a propeller kit to give the monkey, who then becomes your side kick. Cutter will tell you to speak with Kyrin. After telling you about pirates, Kyrin will upgrade you to a Cannoneer.

Go see Kyrin in the Nautilus at Level 30. She will say that you look much stronger and ready for 2nd job, and will give you two quest choices, one that leads to the path of a sharpshooting Gunslinger, or another that leads to the path of a fierce Brawler. Once you accept one of the quests, she will send you to a secret area, where you have to defeat OctoPirates and collect 30 Dark Marbles. They don't give any experience or drops except the Dark Marble. Once you are done, exit the map through the portal. Take the 30 Dark Marbles back to Kyrin and you will advance based on which quest you picked.

Once you are level 60, go to El Nath, and head to the house on the big hill (Chief Residence). Head to Pedro, and talk with him. After a chat, head to Sharp Cliff I. Go inside the crystal portal at the bottom of the map. Double click on the Holy Stone at the bottom. Head inside, fight Kyrin's evil side, and head out with the Black Charm that it drops. Deliver it to Pedro, and you will advance to third job.

Congratulations on hitting 100! Once you hit level 100, Pedro the 3rd job instructor will contact you via lightbulb. After starting the quest, head to Leafre and talk to Samuel in The Forest of the Priest. You will then get a quest to obtain two special items for the fourth job instructor to advance. You will have to kill Manon and Griffey to get the two items, but thankfully, they're special versions of the bosses, which you will find instantly upon entering their respective boss map. Note, they don't drop any of the items the real versions do. After hunting down these monsters and obtaining the two items, go talk to Samuel. He will advance you to fourth job, give you the skill book for Maple Warrior 10, and give you 4 SP and 5 AP.