This page lists and briefly describes each of the major patches to MapleStory since the Big Bang (which occurred ~10 years after the game's initial release). Starting with the Big Bang, major patches have been rolled out as themed groups of content, often centering on a new dungeon or class.

The Big Bang is the first major game-changing update of MapleStory. It updates, alters and adds many maps, skills, and monsters. It was split into three patches. Part 1 updates nearly every map, monster and skill in the Maple World. Part 2 released the first of the Resistance: the Wild Hunter and Battle Mage. Part 3 brings the Mechanic.

Chaos brought in part 1, adjustments to Aran, Evan and Dual Blade in which we also saw the return of the Dual Blade, including changes to stat enhancing items (potions, scrolls, etc.). Part 2 (The Technological Age/Age of Artisans) brings in 'Professions', it allows you to create items, potions and accessories and we also saw Black Mage's dream which took place in Henesys Ruins and Future Ereve and saw Empress Cygnus all grown up. Some items in the Profession system are exclusive to the Profession system. Part 3 (Super Fight) brings in PvP (Player vs. Player) and a whole load of new equips.

In GMS, this was separated into 5 parts, part one included the Future Ereve/Henesys. Part four saw Ice Knight, a PvP mode and part 5 saw Capture the Flag, a GMS exclusive PvP mode.

In GMS, the patch was not split up and was named Ascension. Here, we saw the Wedding Revamp which simplified the Amoria map and added incentives to stay married after a report that noted more than 50% of MapleStory marriages get divorced.

In MSEA, the patch was split into two patches.

This update brought in a ton of new players into the Korean version of the game. In Korea, there was a time where there were about 700,000 people online, a record high whose record before the Legend update was around 400,000.

Advance of the Union

In GMS, these were in 3 parts. The first launched Aran and Evan changes and a revamped Silent Crusade with the new boss Akyrum. This update to Silent Crusade made a ton of changes to the currently existing system and some of which players were unhappy about. While also launching in this first update saw the return of Crimsonwood Keep PQ which was bugged for years after the Big Bang update.

The second part saw more Aran and Evan revamps but also added in Resistance revamps which boosted some classes quite well. Coming in with this update also revamped Mu Lung Dojo (which now is a completely competitive quest), Ellin Forest, Nett's Pyramid (this update was significantly changed from the previous version, assumed to deter botters), Ghost Ship and it has also brought the Destroyed version of NLC and Nebulites (which are similar to the Potential system).

The last update dubbed Alliance Eternal, brought in the first ever Cygnus Knight only revamps and saw the revamp of the popular Lion King Castle and turned it into a theme dungeon. Notably, the GMS version kept the "Party Play" system which in summary, allows players to gain extra EXP bonuses for each party member in party while in the maps due to player request. All the other versions had removed the Party Play bonus from the game. 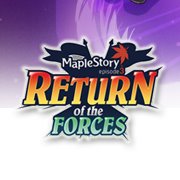 Return Of The Forces

In MapleSEA, these updates are merged into one patch known as Return of The Forces.

In EuropeMS, these updates merged with Justice and Tempest into one huge patch, named Tempest.

Here, the first update brought the long awaited Thief and Pirate revamps, a Navigation system for helping beginner players get to where they need to go, a level-up guide so beginner players know what to do to quickly get to a higher level, minor changes to other classes, disabled PvP and made popular bosses such as Zakum, Horntail and Von Leon instanced. The second update brought Phantom, the Thief hero of the Maple World. The last update brought Aswan, an underground city that has been cursed by the Black Magician and allows you to defeat waves of monsters to help liberate the cursed souls.

In CMS/TWMS/MSEA, we saw Dragon Warrior/Zen, an exclusive Pirate class to these versions. This also caused the Pirate revamp to be moved from the first part of the update.

In GMS, this game update was dubbed Renegades. The first update brought in Jett, who is looking for Burke who assassinated and framed Jett for murdering the king of their home planet. Cerebus Rapid Action Force is now looking for Jett who crash landed into the Maple World and ended up in Nautilus Port. This update also brought in a few UI upgrades (level up guide, navigation system, etc.) and the long awaited Thief revamp. The second update launched the mysterious Phantom! The third update brings Aswan. The Pirate Revamp and Dual Blade Reorganization will be in the Mutiny patch. 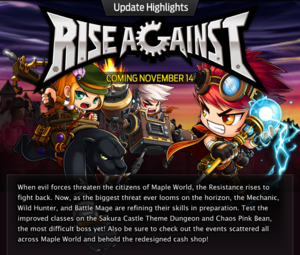 The latest release with a silver logo and a sooner release date. 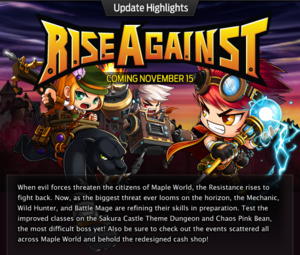 The initial release with a gold logo

In GMS v121 (unnofficial patch preview here; official patch notes here) the three resistance classes, Battle Mage, Mechanic, and Wild Hunter, get a revamp. Battle Mages get damage, speed, and projectile distance increases. Mechanics can now change the color of their mech, they can use a secondary weapon called "Magnum", and they get damage increases. Wild Hunters can get a new mount, the Snow White jaguar named Jaira. They also get a new party buff and increased damage.

This patch also released Chaos Pink Bean, Sakura Castle (an official theme dungeon and the second version of Ninja Castle), a temporary re-release of Red Leaf High School, a Cash Shop revamp, and it started the Thanksgiving events for 2012.

Tempest was released in KMS on July 5th and encompassed several separate updates:

GMS began Tempest: Into the Storm updates on November 28th, 2012. The patches were rolled out similarly to KMS:

EMS began Tempest on December 5, 2012. The order of the patches were a little different from KMS :

Unlimited was released on the KMS server on December 6, 2012.

MapleSEA began Tempest + Unlimited on April 24, 2013. The name of the update is Season2, changed from Episode 3.

Spark is an update that CMS, TWMS and JMS will receive. It brings a revamped UI, new areas to explore along with the rest of the Unlimited update.

GMS called this update Unleashed and has been released in three parts.

MapleSEA released all of the 3 Cygnus Returns patches in one patch on August 7th.

The official name for this update is <기승전12!> but this is almost untranslatable into something meaningful in English so the name that is accepted is from the KMS blogger Orange Mushroom which is "Creation 12!". The patch names are also taken from him as well.

This patch aims to fix most of the problems in the game (hence the name Reboot, which means restart)

The goals of the rebalancing are: